In April of 1974, six women from the local DAR Chapter met at Laura Simpson’s home in Fort Collins to discuss the formation of a genealogy society. In May, Articles of Incorporation were formulated for the Larimer County Genealogical Society (LCGS).

In June 1974, the By-laws and the Constitution were adopted and approved. In September, the membership elected Laura Simpson as the president for two years. By then, twenty-two members joined the society as charter members. See the Past Presidents Tribute webpage for all the past society presidents and their accomplishments. 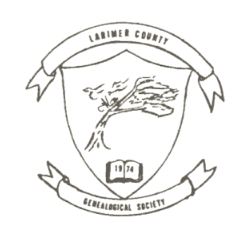 The meeting place originated at a member’s home association recreation center, then moved to the LDS Family History Center six months later. Many guest speakers were invited, an official emblem with a family tree was created, a year book for members printed, and a quarterly newsletter began in January 1975. 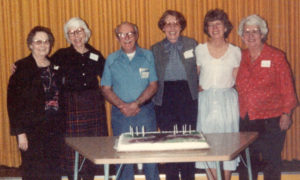 Ten years later in 1984, Glen Van Saun became the sixth president. LCGS held its 10th anniversary, sponsored their fourth annual seminar (and for many years thereafter) with 77 attendees. Betty Wickam, a prominent member received many accolades for leading most of these seminars. Our longest term member, Marilyn Rudd is elected Vice-president.

Ceil Damschroder became the Corresponding Secretary, then became a librarian, and eventually head of Cemetery Indexing and still active today. The Seminar Committee included Jim Willard, who is still active in our society. Many annual potluck dinners were held during the holidays. 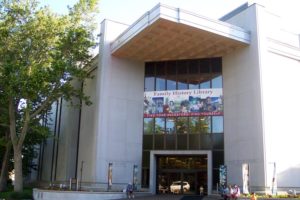 Family History Library Salt Lake City
LCGS organized many field trips during the first 10 years to Cheyenne and Denver Public Libraries and even the Family History Library in Salt Lake City, sometimes with other regional societies. Our first publication, Land Records was published in 1980 and genealogy computer classes are held at the Loveland Library. LCGS became affiliated with the Council of Colorado Genealogical Societies (CCGS) in 1981. A new logo is created in 1984, then redesigned in 1985.

The society meetings moved to the American Baptist Church, where a new genealogy library is created. The members approved updated By-laws to reflect federal guidelines for non-profit organizations. Sixty-four members are registered with the society in April 1984.

Our next publication is the Larimer County Marriage Index, published in 1986, followed by most of the larger cemeteries in Fort Collins and Loveland between 1998 and 2002. LCGS had 100 members in 1991.

Twenty years later in 1994, Ruby (Edie) Davies became the eleventh president. Edie taught a six week genealogy class at CSU’s Continuing Education Series. Jim Willard became the newsletter editor for several years and Ceil Damschroder became the researcher through 2004. Genealogy workshops were held at the Fort Collins Family History Center (FHC). There are 112 members registered with the society as of May 1994.

A Computer Interest Group, primarily for PAF users, is started again in 1992 under Kevin Mielbeck, who later became president. LCGS sponsors two Workshop/Seminars at CSU in 1992 and 1995, which both are deemed successful. Karen Helt is the Chair in ‘95 and later newsletter editor and webmaster. 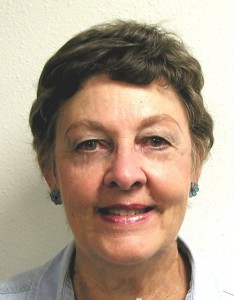 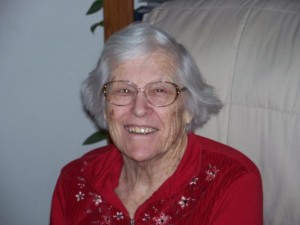 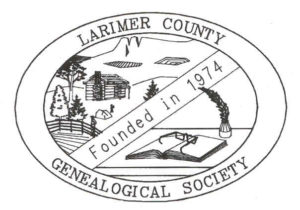 Another logo redesign happened in 1996. LCGS started its own Internet website in 1997 with the help of another prominent member, Les Shader. Ceil Damschroder is elected the 13th president in 1999 for four years. 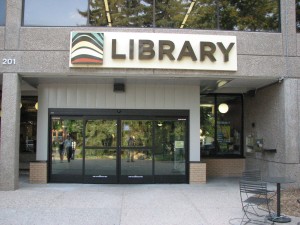 Our next publication, 1885 Larimer County Census is published in 2000. Several other cemetery publications are updated and republished. Membership increases with new programs and a location change to the Allnut Funeral Home. In 2002, the society moved the meeting place to the Fort Collins Main Library. 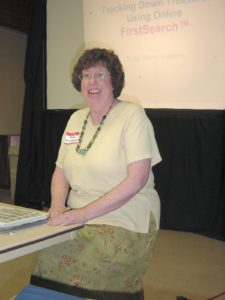 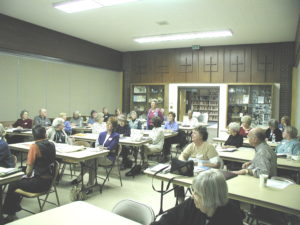 Thirty years later in 2004, Ty Curtis became the 14th president. Membership again totals 100. Several new committees are formed including 30 Year Celebration with the GenFest 2004 seminar, Education and Outreach, Historical, and Standards Committees, and PAF and Family Tree Maker software study groups were established. In 2006, our society moved to the Fort Collins Harmony Public Library. Three research project committees completed the Larimer County Marriage Index through 1950, the Divorce Index to 1950, and the Highland Cemetery in Wellington. And a new society logo was created by a special contest. 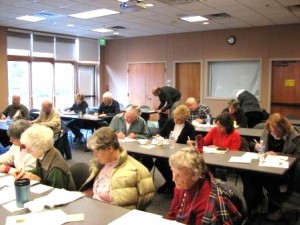 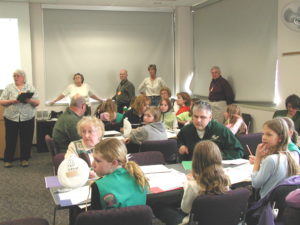 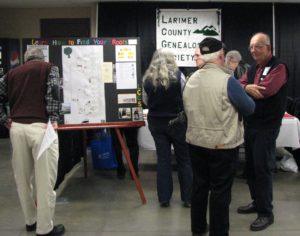 LCGS Booth at Salute to Seniors 2008 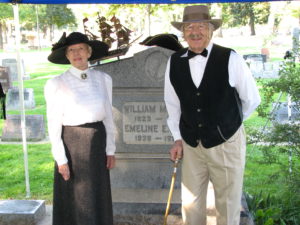 In 2008, our society attended the Salute to Seniors Expos in Loveland two years in a row to promote our society to the public. Over 800 seniors attended the annual expos. We also participated in the annual Fort Collins Cemetery Stroll at the Grandview Cemetery. Many of our members dressed up in Victorian clothing to portray the past famous citizens of Fort Collins. 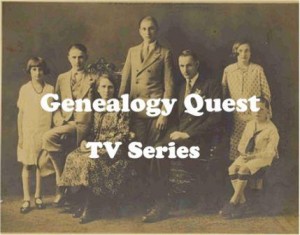 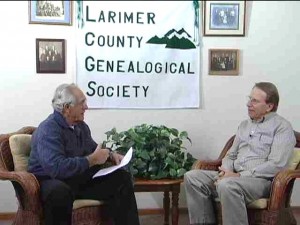 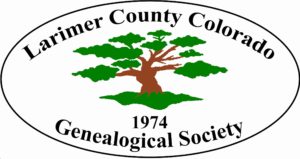 Our society produced a locally produced cable TV program from 2009 to 2012 called ‘Genealogy Quest’ each month that still broadcasts on a local cable channel 97 in Fort Collins. Four to six members produced the series each month. Each program took 50 hours to produce. Members can also watch the series from our website. A set of four DVDs with 16 Genealogy Quest programs are offered to the public and Colorado libraries to train new genealogists. Thanks to Channel 97 for lending us the video and audio equipment and broadcasting our past programs! We also created our own Facebook page and redesigned the society logo in 2010.

Our society continued writing the monthly Genealogy Rocks column in 50 Plus Marketplace News. Thanks to Publisher Robert Trembly for his continued support of this column! 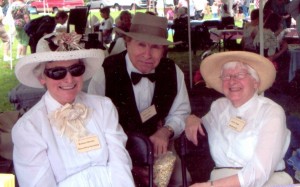 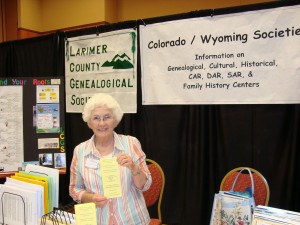 Our website was updated with a new theme in 2012, new home page, new calendar and registration system, and many new webpages. More content, online databases, and training videos were added last year. 185 members are registered by year end in 2012. The society donated $860 for new genealogy books to the Loveland Library. 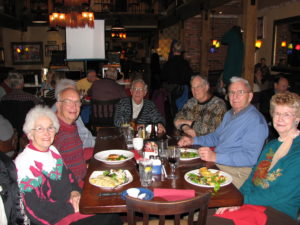 Our annual holiday dinner is another popular event. Sixty five members and spouses attended the 2012 dinner and annual fund raiser. Besides telling personal stories, a Family History Library video was presented plus members received many raffle prizes donated by Ancestry, Family Tree Maker, Legacy, Roots Magic, Family History Expos, 50 Plus Marketplace News and several popular restaurants. Our annual holiday dinners still continue every year. Thanks to these fine sponsors for donating to our society! You can visit our sponsors and contributors under About Us tab.

in 2012, our society created the One-on-One Genealogy Help on Thursday afternoons at the Downtown Fort Collins Library and Loveland Library. Over 30 volunteers at both libraries have helped many new and experienced genealogists with their brickwalls and how to use the online databases. 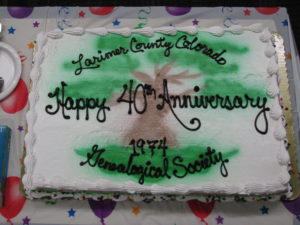 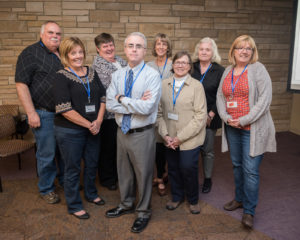 Forty years later in 2014, Stacey Rehbein became president with 188 members, our society celebrated its 40th anniversary, our website was updated and was changed to a different Internet provider, our annual all day conference, Conference For a Cause (C4AC), was created in 2015 featuring national speakers. All proceeds from C4aC go to genealogical preservation projects, one local project and one national. You can visit our Conference webpage under the Events tab to see our past national speakers and the upcoming conference. 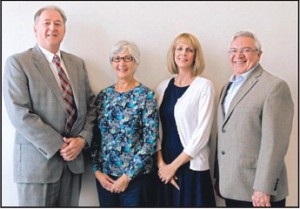 In 2015, our society attended the Family Discovery Day at the Loveland Family History Center. We displayed our booth and taught several genealogy classes at this event. 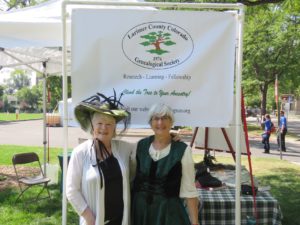 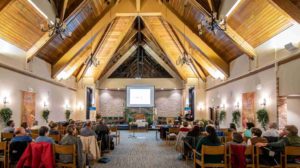 In 2018, our society participated the Rocky Mountain Irish Festival in the Spring with our booth. We revised the Policy and Procedures Manual twice and the Society’s Bylaws to include more clarification and organization to assist future volunteers in their tasks. A new logo was designed for our publications. In collaboration with the Vice President, two new record retention schedules were adopted. The society added five new study groups to include British isles, Colonial, DNA, Irish, & Technology. We moved to the Good Samaritan Village in Fort Collins to increase our attendance from Loveland and Fort Collins members. 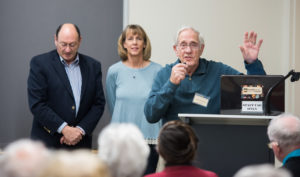 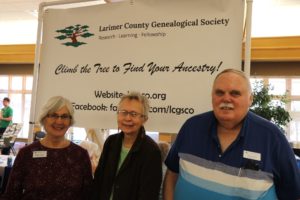 LCGS Board at Life Involved Fair 2020 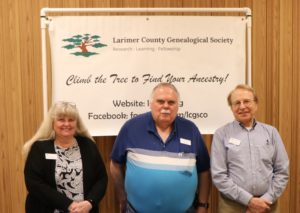 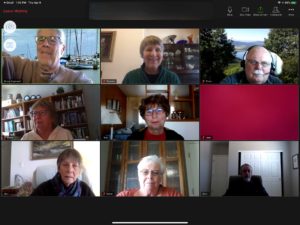 In 2020, our society attended the Life Involved Fair at the Fort Collins senior Center to promote our society. Due to the coronavirus pandemic worldwide, we had to vacate the Good Samartian village to protect their residents, thus started using Zoom teleconferencing again for all meetings and recorded all monthly meetings and several classes for later playback. In March, we attended the Finding Your Family Roots Fair in Loveland. Several of our members gave classes on genealogy at the Fair. We updated the By-Laws and Procedures again.

As you can see, we’re a very active society, so join us for research, learning, & fellowship!

Thank You for visiting our website!
Back to top