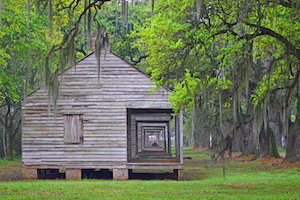 Constructed in 1790, Evergreen remains one of the most intact plantation sites in the South. The grounds include 37 buildings on the National Register of Historic Places (NRHP), including 22 slave cabins. It’s among a handful of remaining plantation homes interspersed along River Road in southeast Louisiana.

While Evergreen Plantation has been open to tour groups since 1997, the site was already steering its efforts to focus on education and research. This was before the pandemic slowed the usual flow of visitors to the historic site.

“It’s the difference between a tourism site and a museum. I felt strongly that it was important to remember the lives of real people and pay tribute to them in a way that doesn’t exploit them again,” Shannon said.

A picture of Victorine, a privately owned domestic slave of Lezin Becnel and his wife Josephine. It is likely that her mother Maria was Josephine’s personal slave, attending to her needs, helping her dress and bathe, and cleaning the house. Victorine was baptized at St. John the Baptist Catholic Church on May 31, 1835, when she was nine months old. The identity of Victorine’s father remains unknown, but as she was described as a mulatresse, half African and half European, her father must have been white.

In addition to the Ancestor Project, Evergreen also established a free online database with information about the lives of more than 400 enslaved individuals who lived and worked at the plantation. While the Ancestor Project is more personal, the digital database is an online tool tailored to teachers, students, genealogists, and visitors. The database launched just as the first COVID-19 cases were confirmed in the New Orleans-area last March.

You can learn more, a lot more, in an article by Maria Clark, published in the Tennessean website at: http://bit.ly/3urzmDt.

The Evergreen Plantation website, including a Slavery Database, may be found at https://www.evergreenplantation.org/.