If you are researching relatives who may have been Holocaust victims, you need to check the Arolsen Archives for records that have just been discovered and added to that collection. According to a story by Bernard Osser and published today in the Times of Israel web site: 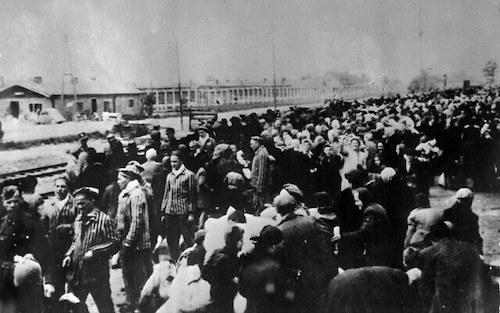 A train-load of victims destined for concentration camp, lined up on the railway station on arrival at Auschwitz.

“Ewa Bazan, an archivist at the Auschwitz-Birkenau Museum, compares her work on newly accessible records to piecing together a “puzzle” that is revealing new names and stories of the Nazi death camp’s inmates.

“Ninety percent of the notorious camp’s files were destroyed by its guards before they fled but a recently completed two-year collaboration with the Arolsen Archives in Germany is bringing new information to light.

“We didn’t know what to expect when we started the project,” Bazan told AFP, barely hiding her emotion.

“The patient, humble research carried out by Bazan and her colleagues has uncovered the previously unknown identities of an estimated 4,000 camp inmates as well as information about 26,000 others.

You can read the full story at https://www.timesofisrael.com/archives-uncover-forgotten-names-of-auschwitz-inmates/.