In 1665, King Louis XIV ordered the Carignan-Salieres Regiment to Canada to help save the Royal Colony from destruction at the hands of the Iroquois Indians. Between June and September 1665, some twenty-four companies of 1200 soldiers and their officers of the Carignan-Salières Regiment arrived in Quebec under the leadership of Lt. General Alexander de Prouville, Sieur de Tracy.

The Carignan-Salieres Regiment was the first regular military unit to serve in Canada. Almost immediately upon arrival, they launched an attack upon the Indians in the dead of winter, and the regiment was almost destroyed. Nevertheless, within months the Regiment stabilized the situation, ensuring the survival of the French colony.

The Regiment established a series of forts along the Richelieu River and conducted another successful campaign into the land of the Mohawk Indians, leading to a long period of peace. The colony prospered as a result. However, King Louis XIV’s plan also included the permanent settlement of many of the soldiers and officers in Canada. Following their service, many of the soldiers stayed on in Canada.

In fact, over 400 soldiers and officers decided to remain in New France when the regiment was recalled to France. Many of the soldiers married the newly arrived filles du roi (Daughters of the King). Most of today’s French-Canadians have at least several ancestors who served in the Carignan-Salières Regiment. 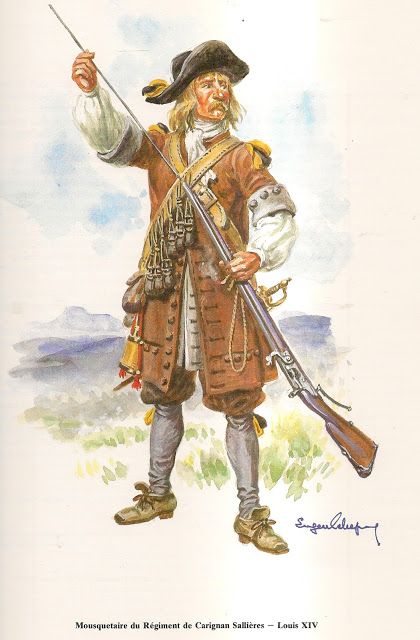 The Carignan-Salières Regiment was one of the first to wear a uniform in the French army. The uniform was brown with a gray lining that was visible in the upturned sleeves, forming a decorative facing. Buff-colored and black ribbons decorated the hat and right shoulder, in accordance with the style of the time. The soldiers of the Carignan-Salières Regiment carried matchlock and flintlock muskets with bayonets, a novelty of the era. They left their pikes in France, since they were of little use against the Iroquois, but they all carried swords.

At that time, the army was made of volunteers. During recruitment, the only condition for the soldier-to-be was to stand at least five feet three inches tall.

A list of most of the soldiers of the Régiment de Carignan-Salières is available  at http://www.quebec.acadian-home.org/carignan-regiment.html and a somewhat different list may be found on the WayBack Machine at https://web.archive.org/web/20100722145914/http://www.fillesduroi.org/src/soldiers.htm.  Other web sites may have somewhat different lists because, “No list of Carignan soldier-settlers will ever be perfect. Since no contemporary list was made in the 17th century – other than one with only dit names (nicknames), made at an unknown date – we can never be sure of the identity of all the members of the regiment.”

For more information about the Carignan Soldiers, look at the following sites: