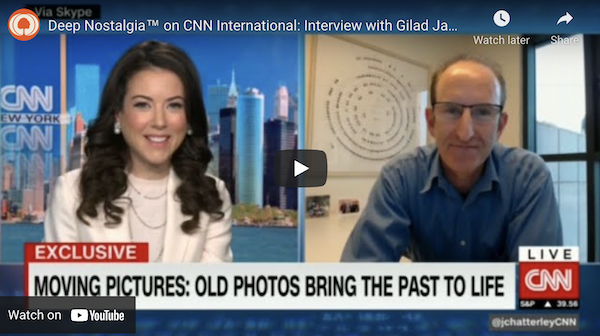 If you have been following all the stories about MyHeritage’s new Deep Nostalgia™ app that has gone viral (30 million animations created in the first few days since release) in social media, various news stories, and elsewhere, you probably will be interested in a new interview published in a video on CNN International.

The MyHeritage mobile app has rocketed to #1 in the rankings for free iOS apps in 22 countries. Founder and CEO of MyHeritage, Gilad Japhet, was interviewed on CNN International by correspondent Julia Chatterley about the feature that has become such a phenomenon and the company behind it.

In the interview, Gilad talked about how Deep Nostalgia™, created using D-ID technology, was conceived, how it works, and why this feature seems to have resonated so deeply with audiences across the globe. He mentioned that he had been particularly moved to see an animation of his father while working on the release of this feature. Interviewer Julia Chatterley also became quite emotional at the display of a Deep Nostalgia™ animation of her own grandmother. She said, “You started me crying.”

You can watch the video on YouTube at: https://youtu.be/U-kEk07cAcs.

Then you can download the free app and look at full motion, color images of your ancestors and other family members.