Before coming to Fort Collins, one of the early settlers, Frederick R. Baker, played an important and unique role during the Civil War as a member of the Union Light Guard of Ohio, which was a cavalry unit assigned as Abraham Lincoln’s body guards. Baker was a witness to the activities that brought an end to the Civil War and to the events surrounding the assassination of President Lincoln. He brought these experiences with him when he arrived in Fort Collins in 1873. Until his death in 1906, Baker was a significant figure in the development of the city. As a major farmer, banker, and four-term mayor, he demonstrated the character, resilience, and vision his military experiences exposed him to. Tracking the odyssey of a Civil War cavalry saber with genealogical and historical records, led to the backstory of Baker, a story that had been lost over the years. 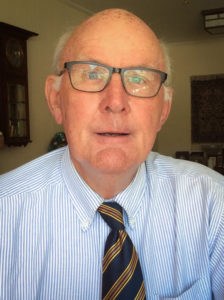 Brian Carroll, a 20-plus-year resident of Fort Collins, is an avocational “keeper of history“, and a researcher of local past events and people that history has forgotten. This story is about one of those people and the saber that was his, which you will be able to see at the program.