The following is a Plus Edition article written on an Android tablet by and is copyright by Dick Eastman.

OK, so I admit it: I am a hardware junkie. I enjoy obtaining a new device, configuring it, exploring its capabilities, and experimenting to see what new capabilities the new device contains. I have had a chance to do that over the past few weeks and thought I would publish my successes and failures to share with Plus Edition readers.

There are now dozens of tablet computers to choose from these days. The capabilities vary widely. Some of the tablet computers use Apple’s iOS Operating System (these devices are called iPads), or Google’s Android operating system (sold under a wide variety of names) and even some tablets that run Google’s Chromebook operating system (also sold under a variety of names).

(Why does Google have 2 different and competitive operating systems? I have no idea but I do like the idea that we have a wider variety of products to choose from.)

I have used a progression of Apple iPad tablets for several years and have been pleased with them in almost every way except for 2 things:

1. Apple iPads are horribly overpriced when compared to competitors’ products that have similar capabilities.

2. Since I use a cell phone that runs Android (and I love it!), I don’t see any reason to memorize the commands and methods of two different operating systems. In this case, I am referring to Android versus iOS. Ideally, I should be using the same operating system on both my cell phone and tablet computers. I prefer Android tablets, not iPads.

A quick look at the advertisements from various online merchants shows that there is a wide variety of Android tablet computers to choose from, all with a wide variety of features. I had been looking for some time but an upcoming planned trip convinced me that now is the time to purchase a new tablet computer. I really enjoy having one very lightweight computer in my carry-on bag, one that has all the capabilities I need every day. (I rarely check a bag with an airline; I normally travel with a carry-on bag and nothing else.)

I found a tablet device that looked appealing in the ads. It was very lightweight (exactly one pound or 0.45 kilograms), a comfortable size with an easy-to-read 1920-by-1200 IPS, 16:10 aspect ratios, 10-inch (25 centimeter) multi touch screen, an included keyboard and trackpad at no extra charge, 128 gigabytes of internal storage space plus a slot to add additional storage space by using microSD plug-in cards (those things are tiny!), wi-fi, and an 8000mAh lithium-ion battery that should last all day in normal use. It also contains a rather fast processor, unlike my older tablet that has rather slow performance, no keyboard, limited storage capabilities, and no slot for a microSD card.

I also found several surprises that I had not expected:

1. A built-in cell wireless cellular modem that can connect to cell towers to access the World Wide Web, email, and more! No wi-fi is needed although wi-fi is usually free whereas using a cellular company’s services usually costs money.)

2. A GPS that is useful in traffic, for finding cemeteries, nearby medical assistance, fast-food restaurants, accessing email, playing games, and much more. (I hope you either have parked someplace or else someone else is driving when you are traveling down the road and using a computer!)

3. The case is rugged: it is made of metal, not the plastic. When the tablet computer is not being used, it folds with the keys pressed next to the screen, thereby protecting both the keyboard and the screen from damage. No (extra-cost) carrying case is needed.

4. Most tablets and cell phones have a higher quality camera on the back of the case for taking pictures and then a cheaper camera mounted on the front for online video chats and for taking selfie pictures. Some of the cheapest tablets don’t even have any cameras. This tablet comes with 2 cameras (which is not unusual) but I was surprised that both of the cameras on this device are high-definition 8.0 megapixel devices (which certainly is very unusual).

5. It will support use of an electronic pen although the pen is an extra-cost device, not included with the tablet.

Indeed, all these capabilities are also available in Apple iPad tablets but at much, much higher prices. 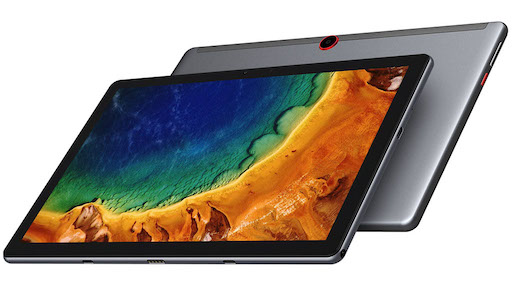 Since I plan to carry this one small device through the airports and even through security, I also wanted to minimize the weight. A one-pound computer seemed like an ideal solution. Even adding in the small power charger and the external keyboard only added a few more ounces. I believe the combined weight of the tablet plus accessories is well under two pounds. That leaves plenty of space and weight for clothing and other necessities.

The biggest drawback I could see is the brand name: I have heard of the Chinese brand once or twice but don’t know much about the company. That isn’t as reassuring as something from Apple, Hewlett-Packard, Amazon Fire, Lenovo, Samsung, and other well-known brands.

I admit that almost all tablet computers are manufactured in China or perhaps someplace else in the Orient. Even those with a label on the cover that says “Apple” were actually manufactured overseas by a contractor, not in an Apple factory. Who knows? They all perhaps were built on the same assembly lines in the same factory. Do I feel comfortable with a tablet computer with an almost unknown brand name?

The major questions were: Could this tiny portable computer perform all the chores I normally need to do when traveling? Even without wi-fi? Could I read and write email messages? Could I surf the web from most anyplace to check airline flight statuses, weather forecasts, and perform all other needed tasks? Is the screen readable? Could I write new articles for the newsletter, such as the one you are reading right now?

I decided to purchase the tablet computer and put it to the test. What could I lose? If it didn’t perform to the advertised claims, I could always return it and get a refund.

I ordered the tablet computer.