If you are using DNA to help identify your ancestry, you will be interested in the latest announcement from MyHeritage. According to the announcement in the company’s blog at https://blog.myheritage.com/2021/01/genetic-groups-new-user-interface-improvements/https://blog.myheritage.com/2021/01/genetic-groups-new-user-interface-improvements/ 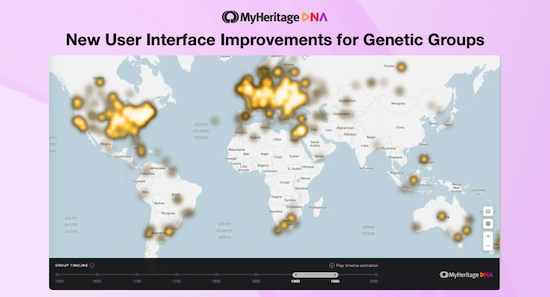 Last month, we announced the release of Genetic Groups: a long-awaited enhancement of MyHeritage DNA ethnicity results which accurately identifies ancestral origins with an incredibly high resolution of 2,114 geographic regions. This new feature gives users the chance to take a deep dive into their ancestral origins and discover the paths their ancestors traveled. Our users across the globe have been raving about Genetic Groups.

We promised further updates to this feature very soon, and we’re pleased to announce that the first set of updates has arrived. This update includes the addition of a Timeline Widget that allows you to follow the migration pattern of a Genetic Group over time — and a more detailed, better organized Top Places section, where you can see where members of a Genetic Group have lived during a given time period.

Since the launch, each Genetic Group has had a drill-down page with specific genealogical insights, including a description of the group, a heatmap showing the top places where the group’s members lived during different time periods, common ancestral surnames and given names in the group, the most prevalent ethnicities among the group’s members, and other Genetic Groups that have close affinity to the group.

Now, there is also a Timeline Widget (with a black background color) that allows you to switch easily between the different 50-year time periods when looking at migration patterns. This replaces a basic drop-down element that we had previously. The Timeline includes at its top right, the new option to play an animation that automatically cycles through all the periods and updates the heatmap automatically. In other words, the Timeline allows you to observe your Genetic Groups’ migration patterns more easily, either manually or with animation.

The announcement goes on with a rather detailed explanation and includes numerous screen capture images. You can read the full announcement at: https://blog.myheritage.com/2021/01/genetic-groups-new-user-interface-improvements/.