Disclaimer: I certainly am not an expert in OPMD or any other medical conditions. However, I became very interested in OPMD when I realized it is frequently found amongst my relatives on the French-Canadian side of my family. (My mother’s ancestry is 100% French-Canadian.) Several of my aunts, uncles, cousins, and more distant relatives appeared to have symptoms of OPMD although several relatives are now deceased so testing of those individuals is not longer possible. I am simply comparing my knowledge of their symptoms with what I have read in medical journals.

I simply have done a lot of reading about OPMD and can offer references to documents written by medical professionals who do have expertise in OPMD. For details, always refer to these articles or to qualified genetics professionals. 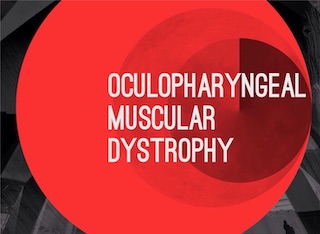 If your ancestry is from France, the French-speaking families of Canada, Jewish, Spanish, or Japanese families, and if you or someone in your family is having symptoms of the upper eyelids and/or the throat or muscle weakening, you might want to get tested for OPMD.

Oculopharyngeal Muscular Dystrophy (OPMD) is a genetic disorder characterized by slowly progressing muscle disease (myopathy) affecting the muscles of the upper eyelids and the throat. Onset is typically during adulthood, most often between 40 and 60 years of age. Symptoms may include: eyelid drooping (ptosis), arm and leg weakness, and difficulty swallowing (dysphagia).

According to information on the U.S. National Institutes of Health (NIH) website, OPMD is most common among a population of Bukharan Jews living in Israel, where an estimated 1 person in 600 is affected. OPMD is additionally estimated to occur in 1 in 1000 individuals of French-Canadian ancestry and 1 in 100,000 individuals in France. In the United States, the number of people with OPMD is not known, however the majority of diagnosed individuals are of French-Canadian, Ashkenazi Jewish, or Spanish American background.

I don’t have statistics but amongst my mother’s relatives, there certainly are many more than “1 in 1,000 French Canadians” in this family with these symptoms!

In short, there are two types of OPMD, distinguished by their patterns of inheritance. They are known as the autosomal dominant and autosomal recessive types. Both types are caused by mutations in the PABPN1 gene.

If you or any of relatives have droopy eyelids, difficulty swallowing, arm or leg weakness, or related symptoms and if you or your relative have French-Canadian, Bukharan Jewish, Ashkenazi Jewish, or Spanish American ancestry, you might want to start reading about OPMD.

NOTE: OPMD is found in Spain and in the U.S.A. amongst families of Spanish ancestry, but it does not seem to be common among the Latin American countries. Therefore, it is possible the inherited problem was spread amongst the families who moved directly from Spain to present-day New Mexico in the late 1500s and into the 1600s but not amongst the families that spent generations in Latin America along the way. However, be aware this is conjecture, not a proven fact.

A small number of Japanese families also reportedly have inherited OPMD but I am not able to find much information about them published in English.

“The diagnosis of OPMD is established in a proband with a suggestive phenotype in whom either of the following genetic findings are identified: a heterozygous GCN trinucleotide repeat expansion of 11 to 18 repeats in the first exon of PABPN1 (~90% of affected individuals) or biallelic GCN trinucleotide repeat expansions that are either compound heterozygous (GCN[11] with a second expanded allele) or homozygous (GCN[11]+[11], GCN[12]+[12], GCN[13]+[13], etc.) (~10% of affected individuals).”

Treatment depends on the signs and symptoms present in each individual. Ptosis and dysphagia can be managed with surgery; however, recurrence of symptoms commonly occurs 5-15 years after intervention.

Again, I am not a OPMD expert. I offer this article simply as an introduction about why you might want to learn more about OPMD.  Always learn from the true experts.

There is a LOT more information available on the NIH website at https://rarediseases.info.nih.gov/diseases/7245/oculopharyngeal-muscular-dystrophy and in the GeneReviews website at: https://www.ncbi.nlm.nih.gov/books/NBK1126/.