For the family historian, few things are as precious as an old family photo. These photos can serve as a tangible link to the past.

While we all cherish the family photos that remind us of a fishing trip with grandpa or a vacation with cousins, it’s likely that we also have some unidentified photos, and we’re anxious to figure out who is in the picture and when it was taken.

If you don’t have a strategy to follow, identifying old photos can be a long, tedious, and sometimes frustrating process. Here are three questions to ask yourself as you begin to identify these unknown photos.

What Type of Photograph Is It?

There were a few types of photographs that were popular throughout the 19th century, so by asking yourself “What type of photo is this?” you’ll be able to gain information as to when and where the photo might have been taken.

“Daguerreotypes were taken as portraits between about 1840 and the mid-1860s,” said Taylor. “A second type of photograph is an ambrotype. Patented in 1854, they remained popular until the early 1870s.”

Other photographs could be tintypes. A tintype is a photograph created on a thin sheet of metal. Tintypes were patented in 1856 and were popular throughout the 1860s and the 1870s.

Who Was the Photographer?

After determining what type of photo you’re looking at, Taylor suggests searching for the photographer’s name.

“If there is a photographer’s name on the print, it’s usually on the front,” she said. “If you find a name, you want to research the photographer like they’re a member of your family. You want to treat them like family, using all those genealogical documents that you use for researching your family.”

What Type of Props Are in the Picture?

Successful family photo detectives have trained eyes that can quickly recognize and identify even the slightest of clues that are hidden in old photos. 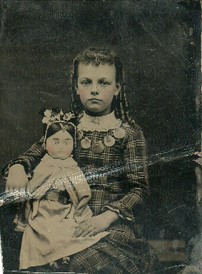 “What types of props might be in a picture?” asked Taylor to the RootsTech audience as she displayed this photo of a little girl holding a doll. “Her clothing clues tell me something about her. It’s probably the early 1870s, and what is she wearing around her neck? A scallop shell necklace.”

Taylor noted that this necklace could indicate that this girl lived close to the coast, or perhaps it was a gift from a relative who did.

Whatever the prop may be, it could hold an important clue into unlocking the mystery ancestor in the photo.

“Props can be difficult or impossible to identify, but they typically played an important role in an ancestor’s life,” wrote Taylor in her book Family Photo Detective: Learn How to Find Genealogy Clues in Old Photos and Solve Family Photo Mysteries.