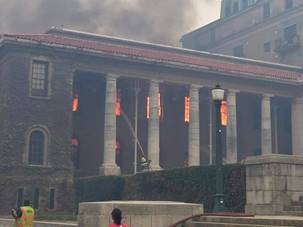 University of Cape Town (UCT) Library ablaze with hundreds of years of history up in smoke. The Table Mountain fire hit across the City of Cape Town and the University having to evacuate their students on Sunday. The inferno made its way from Table Mountain, through Devil’s Peak, and into Newlands. To see a video go to: https://www.thesouthafrican.com/news/watch-cape-town-fire-latest-updates-sunday-uct-library-video/

At this time it is thought to be a wildfire.

Precious archives, historic texts, and collections of African Studies are all in jeopardy this afternoon. The UCT Library is home to some classic publications, and has a long-standing history as an extraordinary hub for higher education.

More video on the blaze can be seen at: https://www.thesouthafrican.com/news/watch-table-mountain-fire-uct-students-evacuated-blaze-reaches-campus/

The University of Cape Town’s Jagger Library houses more than 1,300 collections of unique manuscripts and personal papers of prominent South Africans dating to the 18th century. The collection of books and pamphlets exceeds 85,000 on African studies alone.  Cape Town Executive Mayor Dan Plato said. “It is tragic that literary treasures have been lost at the UCT library, but I have been informed that some of the most valuable works were saved by the quick activation of roller doors.”

The Washington Post reported, The fire started Sunday morning near the memorial to colonial leader Cecil Rhodes and quickly spread uncontrolled beneath Devil’s Peak in Table Mountain National Park in an area popular with weekend hikers and cyclists. More than 200 firefighters and emergency personnel, supported by four helicopters and a spotter aircraft, battled the blaze, but the strong winds were hampering aerial support on Monday, the city’s disaster operations center said.  “Some of our valuable collections have been lost,” she said. “However a full assessment can only be done once the building has been declared safe and we can enter.”

By Monday morning, strong southeasterly winds, which were expected to reach more than 30 miles per hour (50 km/h) later in the day, had pushed the fire toward densely populated areas above Cape Town city. Well-known tourist sites, such as the Table Mountain aerial cableway, were temporarily closed.

Thank you to Helen Dakers, United Kingdom for sharing the information with us.

Comment by Dick Eastman: Updates to this story are being posted often at: https://www.thesouthafrican.com/news/watch-table-mountain-fire-uct-students-evacuated-blaze-reaches-campus/.